Digital Signage becomes important when we need to save energy

Will high electricity prices and a potential energy crisis affect the use of digital communication channels in public places? Hopefully yes – because if we want to save energy, digital signage is one of the best solutions. If they are used correctly.

Digital signage has become a matter of course in the public space. It is about everything from information screens and digital menu boards to pure advertising channels and DOOH. The screens can be found in retail stores, restaurants, public transport, and other public areas. Tanks to the efficiency of the communication channel, they are here to stay. Something that became especially noticeable during the pandemic, where the need for a tool to quickly communicate and change messages became apparent.

The high energy prices of the winter and spring, and not least the concern that there will be a real energy crisis during the colder months of the coming year, have caused some to highlight the question of whether digital signage are really needed. The short answer is that, at least from an energy and cost perspective, there is no alternative and that one should rather invest in more digital signage than fewer. But that requires that we don’t trudge along in old, habitual tracks, but that we learn to use the screens better and more efficiently.

The change from analogue to digital signage has often had cost and efficiency as driving factors. It is quick, easy, and efficient to update a digital solution compared to printing, distributing or for that matter writing the information by hand. In the same way, the cost has been low, and it has been quick to get ROI on the digital switch.

Energy consumption has hardly been a factor at all. Low prices and good availability have meant that one rarely, if ever, had to calculate the electricity cost particularly carefully. Especially since the screen technology has also developed enormously in recent years and the screens draw less and less electricity both when they are switched on and when they are in sleep mode.

Now the reality has quickly become different. Electricity prices are skyrocketing and there is talk that rationing may be necessary in the coming winter, at least in some particularly vulnerable parts of Europe. We should therefore do what we can to reduce and minimize our electricity consumption, and this of course also applies to all those who have digital signage in their retail stores, offices or wherever it may be.

The simple, and one might think obvious, solution is to review all your screens in terms of energy saving settings. Both when they are switched on and above all that they are set to go into sleep mode when they are not needed. If it has traditionally been a minimal extra cost to leave screens on overnight, or other times when the surface is not in use, it is now almost a duty for us all to think about and do the extra work needed to minimize our electricity consumption.

The feature is there in all screens, it’s just to get if even someone cared much about it before. If you’re lucky, you also have digital signage software that controls the screen, where the process can easily be automated from a central location. In the worst case, you must work on screens being turned off manually at each location. But make sure it is done, because here we save electricity and clearly show the outside world that we are part of the solution, not part of the problem.

Overall, digital signage solutions are significantly more energy efficient than printed and distributed alternatives. But if we can contribute to further saving energy, it goes without saying that we should do it!

Three tips how you can reduce screens’ energy consumption: 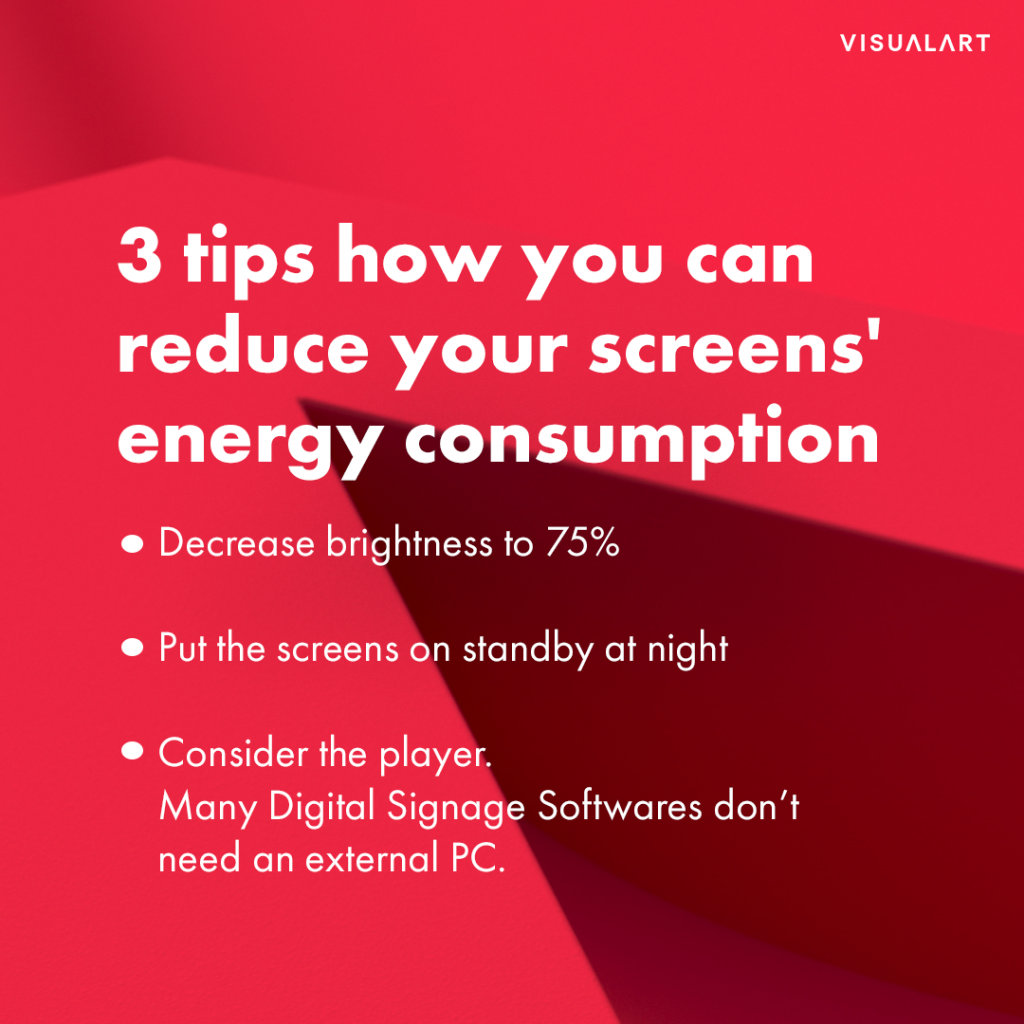 Talk to our experts if you want to know more about how to reduce your screen’s energy consumption.